When is the Best Time to Aerate Your Lawn? 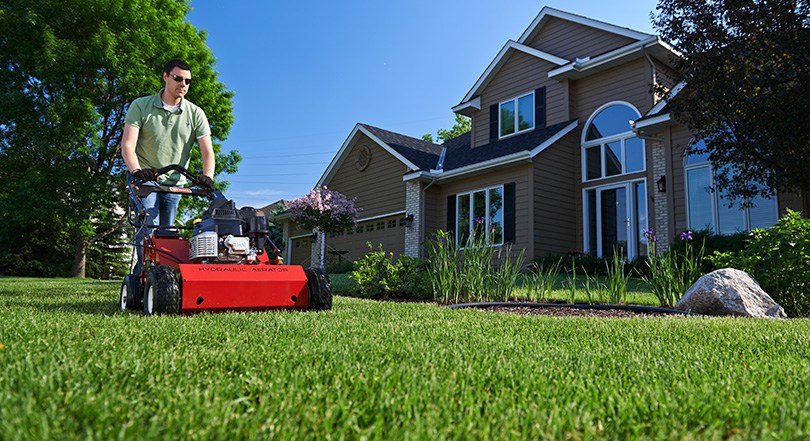 Regardless of where you live and what type of turf grass you’re working with, aeration can help your lawn be healthier and more beautiful. The trick is knowing when it’s best to aerate, what equipment to use, and what else you can do to encourage the vigor of your grass. Additionally, aerating can also assist in limiting weeds’ ability to gain a foothold in the lawn.

According to Josh Friell, Ph. D, of The Toro Company’s Center for Advanced Turf Technology, aeration introduces temporary stress to the turf. Recovery time is closely linked to growing conditions and annual growth cycles. As a result, it’s important to keep those considerations in mind when determining an annual aerification plan.

Aeration is best performed just before or during periods of high growth. However, not immediately preceding or during periods of stress to the lawn. For example, heat or drought. The type of grasses that make up your lawn will determine the best time of year to aerate.

When to Aerate if You Have Cool-Season Grasses: If you’re working with cool-season grasses, including bluegrass, fescue, and ryegrass, aerating during the growth periods in the spring and fall is best.

When to Aerate if You Have Warm-Season Grasses: For warm-season grasses such as Bermudagrass, buffalograss, St. Augustine and zoysiagrass, aerate during warm times of the year, between late-spring and early-autumn.

Considerations for Aerating in the Spring: In the spring, wait until you’ve mowed the lawn a few times before aerating. Doing so ensures the lawn will grow fast enough to recover and take advantage of the increased pore space and air exchange at the root zone that aeration creates.

One caveat, says Friell, is that any disturbance of the root zone in the spring can increase weed competition by bringing buried seeds to the surface. “Applying fertilizer and a pre-emergent weed killer following aeration can reduce the potential for weed competition and increase the hardiness of the grasses. But don’t apply a weed killer if you plan to overseed following aeration. It will prevent germination of the seed you put down.”

Considerations for Aerating in the Fall: “Aeration should be performed early enough in the fall that the turf can recover before it needs to prepare for winter dormancy,” Friell said.

How Frequently Should You Aerate Your Lawn? As for frequency, Friell said aeration should be performed at least once per year on most lawns. Lawns with compacted soil or soil with high clay content may benefit from aeration twice annually.

3 Things To Do After Aerating Your Lawn: