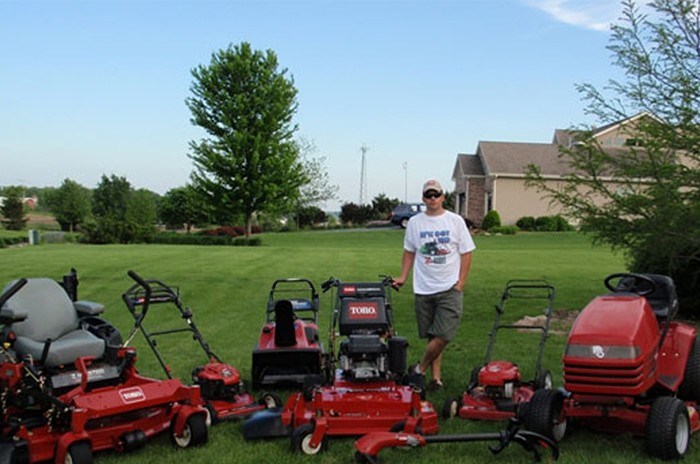 Jeff Rausch has been running his own landscaping company, Daybreaker Lawn Care, for a year now. The company began steadily gaining accounts because of his perseverance to succeed in this slowly upturning economy. “When I was a kid, I always enjoyed lawn mowing anyways. And then recently, due to the economy primarily needed to do something else. So I decided to get into landscaping just because I always enjoyed it. I figured it was a good way to start doing my own thing, which was always kind of my goal.”

Jeff started his business using only Toro equipment, and he intends on keeping it that way because of his first memories of the company. “There was pretty much no question — I didn’t really even look at other manufacturers. It was gonna be Toro and that was that! I didn’t really even consider anybody else. I already knew I wanted something that was going to be good for me. Something that if I spent the money, that something is going to last.”

He was introduced to Toro when his father bought their first lawn mower (a Toro Wheelhorse) from a close family friend, Dave Kohlhagen. Jeff was in the eighth grade at the time, but after 15 years of the Wheelhorse running flawlessly. He knew what equipment he wanted to start his business with when the time came.

“I have a walk behind mower, and I pull it out after being in storage for the wintertime, and it fires almost immediately,” explains Jeff. “I’ve had other lower-grade outdoor power equipment that’s a real nightmare trying to get it to fire up after the wintertime. Even after I follow the proper storage techniques, and I’ve never had that problem with any of the Toro stuff before.”

Jeff is meticulous about maintaining his equipment. “I take pride in the equipment; I’ll even go so far as to buy a can of the Toro touch-up paint so when I put the equipment away for the winter, I can clean up all the nicked areas so it doesn’t rust.”

He currently owns four pieces of Toro equipment for his business. As he continues to grow and expand, he says he will add more Toro products. “I know that if it’s a Toro product, it’s not going to fail me. It’s going to be built to last. Following the maintenance schedule, which I will, I know it’s going to be a reliable piece of equipment.”

Jeff recently asked family friend Dave (who works for Toro distributor PMA Outdoor Equipment in St. Charles, IL) for some decal stickers to place on his trailer or truck to help advertise the Toro name, which matches the drawer full of Toro t-shirts and hats he has kept at home. He continues using the equipment because of its ease of use, reliability and simple maintenance. Jeff says he would be inclined to recommend the Toro brand because of his experience with the products. “I will say that anytime I’ve ever come into contact with anyone that would be in need of some sort of landscaping equipment, I would definitely recommend Toro. There’s no question about that! I’ve always liked their products, and I know they are the best out there, as far as I’m concerned.”