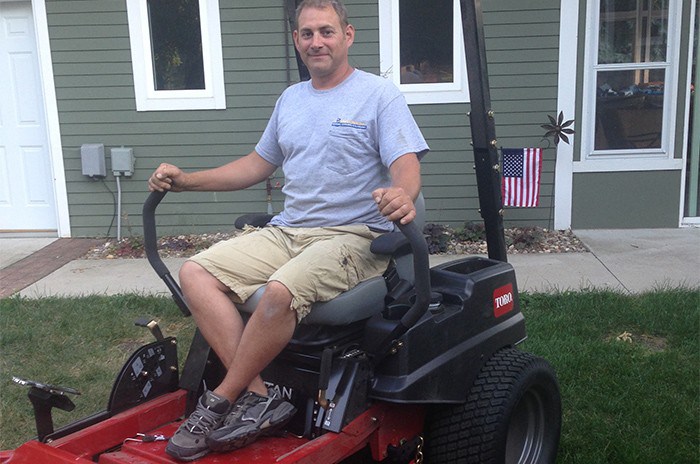 Jesse Jones had never owned a Toro before. When his mower unexpectedly died this summer, he went to J&K Snowmobiles in Estherville, Iowa to find a new one. Although he was initially “drawn in by her pure beauty,” he couldn’t believe all of the high-performance options the Toro Titan MX5400 offered.

Jones is a fun loving guy who appreciates appearance, but also wants a mower that can perform. Although he loves the racing red color and the dual cup holders, he has two favorite features. “I love the whisper quiet blade. I don’t believe I’ve ever had a mower that was this quiet. My old mower was extremely loud and would scare me when I would start it.” Jones also loves the zero turn feature. It has cut his mowing time down tremendously.

Jones claims it was love at first sight. So much so that he gave his MX5400 an affectionate nickname. He calls the machine “Tory.” He even jokes that he wants to get a custom beaded seat cover for “her.”

Jones loves mowing with Tory so much that he is now suffering from what he calls “Zone-it-out Syndrome”. The last time he mowed his lawn, he didn’t even notice that his wife had tried to call him multiple times. When he’s on his Toro, he’s in the zone. On any given night you can find him and Tory out for a ride, enjoying the warm summer air and scent of freshly cut grass.