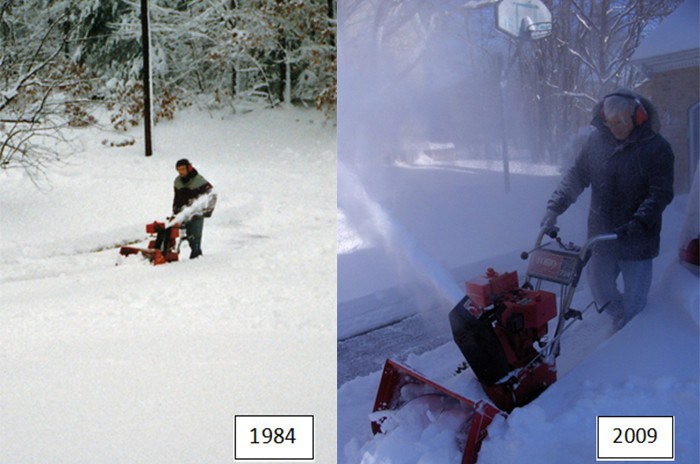 This is a testimonial to the ruggedness, quality, and longevity of Toro residential equipment. I purchased a Toro 21″ HP Rear Bagger lawnmower (Model 20584) in August 1986. I am still using that same lawnmower in 2013, 27 years later! See the pictures to the right which show me pushing this wonderful Toro machine (it is not self-propelled!) at the spry young age of 33 and then just last week, 27 years later, at the ripe old age of 60!
The engine on this Toro lawnmower has only been overhauled once in 27 years. Just last year, I did have to install a manual fuel cutoff valve in the fuel line between the tank and the carburetor due to a small fuel leak in the carburetor that could not be repaired due to its age. Believe it or not, the engine still usually starts after 2-3 pulls on the starter rope. That starter rope has only been replaced once. The rear grass catch bag is original! It is still fully operational. Not a single rip anywhere in the fabric! The wheels are also original, though with some definite tread wear.

Amazingly, the air filter is also original. I carefully remove it and clean it after every season and soak/squeeze in the requisite few ounces of oil to keep it from getting brittle and to help it collect dirt. It works! The only other adjustments that have ever had to be made are slight adjustments to the blade clutch.

I try to take the best care of my equipment, following guidance in the manuals for pre and post season maintenance each year. But, even with that extra care and diligence, I must say that I am quite amazed that this lawnmower has lasted this long, given that it has been used to mow our lawns in Massachusetts and Maryland of approximately ¼ – ½ acre every 1-2 weeks for approximately 6 months of every year for the last 27 years!

And if that weren’t amazing enough, I have yet another similar story about yet another amazing Toro residential product. I purchased a Toro 724 snowthrower (Model 38050) in November 1984 to help me clear my long driveway of the deep snows that frequented Massachusetts each winter season. Again, amazingly, that magnificent machine is still helping me clear my long Maryland driveway in 2013, 29 years later! The pictures below show me using my brand new machine in 1984 and my then 25-year old machine in 2009. It is still working like a champ in 2013!

I cannot express my amazement at how long both of these Toro machines have lasted! You guys build them tough and build them to last! The superior quality and ruggedness that you design and build into your products results in loyal customers and great marketing through word of mouth recommendations.