Kubb: A Game For All Seasons

Kubb, also known as Viking chess, is a fun and versatile outdoor game for the whole family to play year-round. The team game can be played with as few as two players, up to as many as twelve players, and can be played on grass, sand, or even snow – making it a great game for any gathering!

How to Set the Field

The game, according to the U.S. National Kubb Championship website, is played on a rectangular field measuring 5m by 8m. The game pieces consist of four corner markers, two mid-field markers, ten kubbs, one king kubb, and six batons. To set the field for play, set the corner and mid-field markers in place, five kubbs along both 5m sidelines, and the king at the center of the field.

The game is played by each team taking turns throwing batons in attempt to knock over all of the kubbs on the opposing team’s half of the field. The first team to knock over the opposing kubbs and then the king kubb wins. But be wary! Knocking over the king before all of the other kubbs will automatically result in a loss for that team!

Where to Get a Set 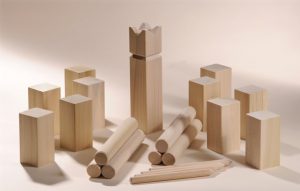