Few things are more destructive to a gently rolling landscape than moles. These voracious pests dig tunnels through the ground (often at speeds of up to a foot per minute) to seek out grubs, worms, ants, and the other insects that make up the bulk of their diet.

In the United States, they are often cited as one of the most common backyard pest problems—and one look at a yard overrun with these creatures, and you’ll see why. Moles are also a safety hazard, as tunnels collapsing underfoot can cause falls, sprains and even broken bones.

Impact of Moles on Lawns

The first sign of moles is a mound of soil on top of the ground. As the moles construct their tunnels, the dirt has to be dislodged somewhere, resulting in the creation of molehills.

Other indications include visible trenches, feeding burrows, and dead spots where they’ve caused substantial damage to the underlying root system. In other words, these critters are destroying your lawn from underground—and all the overseeding and aerating in the world won’t help. There’s little you can do to improve the look of your lawn until you get rid of the moles altogether.

As is the case with almost all pest control, prevention is your best approach. By making it difficult for the moles to survive in your yard in the first place, you can avoid many of the costs and hazards of getting rid of them later.

Moles love to snack on lawn grubs (which are destructive in their own right), so getting rid of the grubs can help. Insecticides can work, but so can taking good care of your lawn. Seeding and fertilizing in the fall, raising your mower blades to at least two inches, and not overwatering can all contribute to lawn conditions that look great and don’t encourage grub growth.

Although it’s not a good idea to get a pet solely for mole control, a dog or cat patrolling your yard can help warn moles away.

Moles love gardens because they’re an ideal habitat for another of their food sources, earthworms. However, moles dislike the scent of garlic, castor beans, and chocolate lilies. By planting these around your garden or yard, you can often stave off moles.

Other options include burying a mesh fence around the perimeter of your yard or garden. These have to go about two feet deep in order to be effective but can be worth it, especially in a small lawn.

If you already have moles, you’ll need to eliminate them entirely. How you approach this task will depend on where you live, as some states ban trapping, while others have strict regulations on which poisons you’re allowed to use. 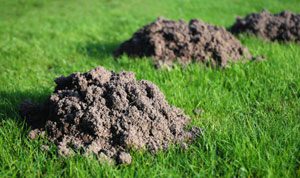 Live traps are one of the most humane ways to eradicate moles, as you are able to relocate the moles somewhere else (as opposed to killing them). This requires you to determine which tunnels are active and lay the traps.

Like live traps, these are laid at the ends of active tunnels. The moles enter them and are either killed immediately or trapped to be exterminated.

Poison bait is another option for homeowners who aren’t afraid of killing their uninvited visitors. There are several different choices on the market, but be careful of what you use if there are children or pets nearby.

Many moles dislike the sound of sonic pulses, which are only discernible to their ears. By burying these in your yard, you can often encourage moles to move on to areas where they aren’t plagued by unpleasant noises.

Mole sprays and repellants work to varying degrees. Some people swear by home remedies, while others rely on industrial chemical formulas used by professional exterminators. Anytime you do this, however, it’s important to check and see if the chemicals will have an impact on lawn growth, watering, and care.

If you’re uncertain or uncomfortable tackling this project on your own, be sure and contact a lawn specialist and/or exterminator. Getting your lawn back in order might take a few extra steps, but the end results will be well worth it!